The product of the Hollywood iconic restaurant on the Sunset Strip in 1940's. The Cock 'N Bull was a mock British tavern known for its sauciness. This brew was created by the owner and served with vodka in a copper cup. A good bet if you are looking for something a bit different with a kick of ginger. 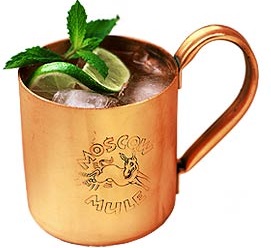 Once upon a time, say, back in the 1940s, vodka was little known in the United States, and gin reigned supreme as the clear spirit of choice. A gentleman by the name of John G. Martin, president of G.F. Hueblein Brothers, Inc., had a wild notion. He bought a vodka distiller, and acquired a vodka recipe that had belonged to a Russian family named Smirnov. Martin was sure everyone would love it. Unfortunately, Martin was a man ahead of his time. Vodka wasn't a smash hit. In fact, he had a hard time giving the stuff away, and he hit the road on a sales trip. He made it to Hollywood, where he stopped at the Cock 'n' Bull for a bite to eat. He struck up a conversation with the owner, Jack Morgan, and learned that Morgan had a white elephant of his own, the ginger beer he made on the side.

The Kicker
The final ingredient in their marketing scheme involved a friend of Morgan's. She had inherited a copper factory, and had an abundance of copper cups to offload. They decided to sell and serve a new cocktail in one of the copper cups, engraved with the picture of a kicking mule.