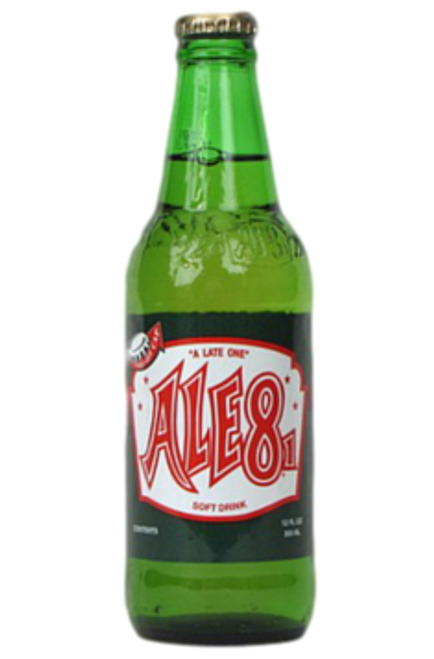 Ale-8-One could be described as a ginger ale, but with more caffeine, a fruitier flavor, less carbonation, and about 1/4 fewer calories than conventional soda. Its closely guarded recipe yields an exceptionally clean, authentic beverage that tastes as if it just came from a Depression-era drugstore soda fountain. Known colloquially as Ale-8, this hard-to-find, regional soft drink dates to the 1920s and is bottled by a family-owned enterprise in the small town of Winchester, Kentucky, where the beverage is especially popular.

Makes Great Cocktails
Some Kentuckians are fond of mixing Ale-8-One with one of the commonwealth's many bourbons, such as Maker's Mark, Wild Turkey or Buffalo Trace. This concoction has come to be known as "The Kentucky Cocktail" and is a signature drink at multiple Kentucky establishments and Derby Day parties everywhere. Ale-8 is also often mixed with vodka or Seagram's Seven to produce "Tender Lovin" and "Kentucky Beer" cocktails, respectively. The unusual Ale-8-One name, pronounced 'a late one,' is rumored to have been its creator's play on words in dubbing it "the latest thing" in beverages at that time, although some suspect the name had more to do with the wee-hours nights this beverage can induce when mixed!

About Ale-8-One Bottling Company
It is bottled by the Ale-8-One Bottling Company, a family-owned enterprise in the small town of Winchester, Kentucky, near Lexington, where the beverage is especially popular. G.L. Wainscott blended the first batch in 1926. To choose a name for the drink, Wainscott sponsored one of the first name-the-product contests in the United States; "A Late One" was chosen as the winning entry. The "Ale-8-One" logo is a pun of the phrase suggesting that his product was "the latest thing" in soft drinks. Today, the unique mix of ginger and fruit is still made using the same secret family recipe handed down by Mr. Wainscott.